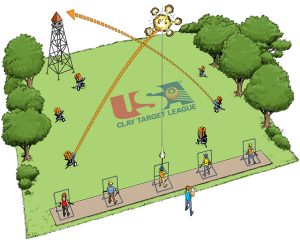 A practice or competition event will consist of shooting two 25 target rounds for a total of 50 targets. Athletes compete in turn taking five shots at clay targets from five separate stations (stands)

Ammunition specifications must meet the use requirements of the shooting range.

A 5-stand field’s target throwers are strategically placed throughout a large field. Each of the five stations that are aligned in a row are partially enclosed by a cage that limits the angles of shooting at targets. Each athlete can view the targets from all stations from the station they are shooting from. Once all athletes have completed a station they move in a clockwise rotation to the next station.

Targets At Each Station

Five shots are taken at each of the five stations. After the first five shots are completed by the entire squad, each shooter will move to a new station by:

Each station has a menu card notifying the athlete where each target is being thrown. Targets are thrown from a pre-determined sequence with a variety of flight angles and consistent speed settings. Targets may be thrown from left to right, right to left, fading away, incoming, rabbit (along the ground), vertically, and from a tower or elevated platform. Generally, the first target thrown from each station is a single target followed up with either a report pair or true pair to round out that station. A report pair is defined as a single target thrown followed by another single target thrown upon the completion of the athletes first shot. A true pair is defined as two individual targets being thrown at the same time by multiple throwers. No shooter will move to the next station until the last target in a round is completed.