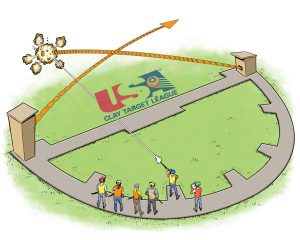 The shooter shoots from seven positions on a semicircle with a radius of 21 yards, and an eighth position halfway between stations one and seven. There are two houses that hold target throwers that launch the targets, one at each corner of the semicircle. The traps launch the targets to a point 15 feet above ground and 18 feet outside of station eight. One trap launches targets from 10 feet above the ground (“high” house) and the other launches it from three feet above ground (“low” house).

Targets At Each Station